July is National Blueberry Month, marking the time of year when blueberry sales are at their peak. 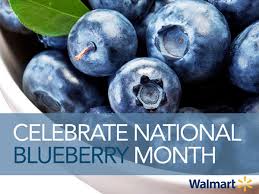 During the summer, most Americans will enjoy a delicious blueberry pie, muffin or even a smoothie, and they’ve learned since childhood that blueberries pack a strong nutritional punch. Yet some Americans may not recognize the many health benefits of Mother Nature’s super-fruit, which make blueberries so good for us. The benefits stem mainly from the fruit’s key ingredient – pterostilbene.

Pterostilbene – what is it?

Must Read
Learn How to Craft the Ultimate Weight Loss Plan!

The Best Choice of Drink In All Occasions

How the E-Cig Revolution Started and How Things Are Today

E-cigs have emerged as a healthier alternative to tobacco cigarettes and although still illegal in many countries around the world, Read more

Pterostilbene is a powerful natural antioxidant that, as shown in published research, holds great promise for the support of heart health, cognitive function, anti-aging and the management of weight, blood sugar and other metabolic disorders. These benefits were outlined in the results of a clinical study conducted by the University of Mississippi.

Pterostilbene is similar to another, more well-known, antioxidant called resveratrol, which is naturally found in grapes and wine. But, pterostilbene has several significant advantages over resveratrol, including superior bioavailability, seven times longer half-life in the body and greater oral absorption.

The upshot is this: yes, natural compounds called stilbenoids exist that might help mitigate the potential damage of gorging on eggnog, brie and cookies over the holiday season, and yes, these substances are available in berries, grapes and wine. But if you really want to consume enough stilbenoids to reap clinically relevant health benefits, you have to bring nature to the vitamin shelf in the form of a daily stilbenoid supplement, preferably in a highly bio-available form such as pterostilbene.

Stilbenoids, the chemical compounds responsible for the beneficial health effects of small berries, belong to a class of compounds called phytoalexins, which are naturally produced by plants when under attack by pathogens such as bacteria or fungi – in other words, they are a part of a plant’s defensive arsenal. Stilbenoids are potent anti-oxidants, meaning that they help fight free radicals caused by oxidative stress and support healthy cellular aging. Stilbenoids have also shown promise for the support of heart health, cognitive function, sports nutrition and the management of weight, blood sugar and other metabolic disorders. For example, a human clinical trial led by Dr. Daniel M. Riche at the University of Mississippi School of Pharmacy found that pterostilbene, the stilbenoid found in blueberries, reduces systolic and diastolic blood pressure in adults. While many animal studies have found pterostilbene to have beneficial health effects, this was the first study to be conducted in humans.

Video Blog Explains it all:

In his video blog, natural ingredients industry leader Frank Jaksch discusses the benefits of pterostilbene, both in blueberries and as an independent ingredient, and explains why he has been taking pterostilbene orally on a daily basis for more than three years.

That said, blueberries are obviously a great addition to any meal, especially for those looking to take advantage of the many health benefits of pterostilbene this season.

Frank L. Jaksch Jr. is the founder and chief executive of ChromaDex®, an innovative natural products company that provides proprietary, science-based solutions and ingredients to the dietary supplement, food and beverage, animal health, cosmetic and pharmaceutical industries. ChromaDex is the manufacturer of pTeroPure®, a 99 percent pure, patented, nature-identical form of pterostilbene.

JUNK FOOD ARE NOT THAT BAD FOR YOUR HEALTH!

10 Things You Should Know About Common Diseases